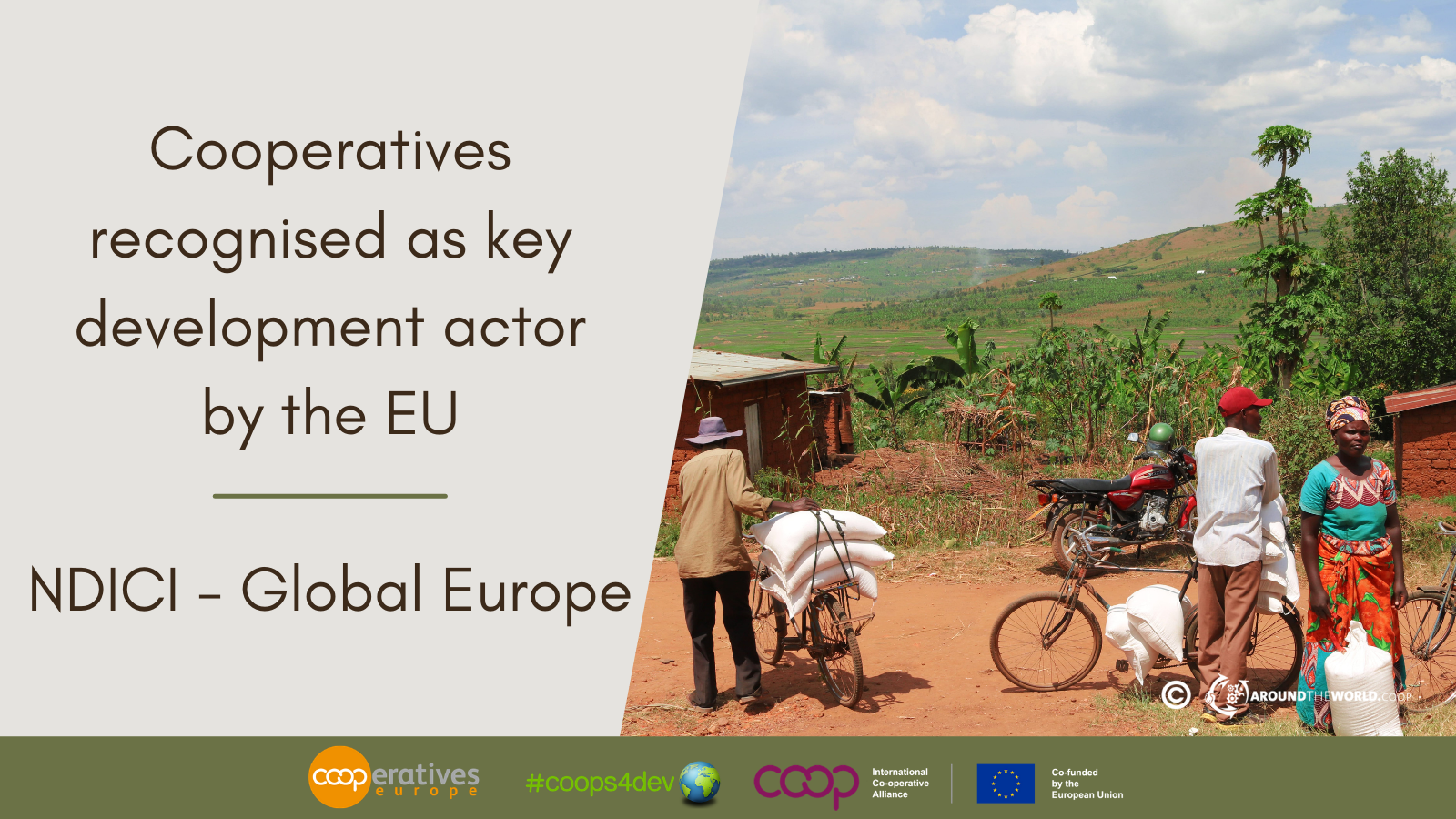 Cooperatives Europe, due to the ICA-EU Partnership on international cooperative development ( #coops4dev), in collaboration with its Development Platform (CEDP), has been advocating for the recognition of cooperatives as an important development actor contributing to the achievement of the EU’s external action objectives. The EU has recognised this added value with several mentions of the cooperative model in the NDICI – Global Europe regulation.

Firstly, Cooperatives Europe welcomes that the regulation recognizes cooperatives as development actors contributing to sustainable development, the achievement of the SDGs and the creation of prosperity and decent jobs. Cooperatives Europe is also pleased that the EU commits to invest in cooperatives, among other actors, as a way of “promoting socio-economic and environmental resilience in partner countries with a particular focus on the eradication of poverty and the reduction of socio-economic inequalities”. This mention underlines the resilience of cooperatives as economic actors contributing to the wellbeing economy.

Moreover, Cooperatives Europe also celebrates the recognition of cooperatives as actors contributing to the EU’s green priorities with a particular focus on low-emission and climate-resilient green growth, acknowledging their role in achieving green economic democracy. In addition to this, the European Fund for Sustainable Development Plus (EFSD+), the main EU instrument of private sector investment in EU partner countries, explicitly mentions support to cooperatives. This is a great advocacy milestone, acknowledging the diversity of private sector actors but also the positive impact that people-centered and locally rooted private sector can have on the livelihoods of communities.

Cooperatives Europe agrees with the EU on the need to “create an enabling regulatory environment for economic development and support companies, in particular MSMEs including start-ups, as well as cooperatives” and commits to support further common efforts in this direction. Moreover, the EU is stepping up its commitments when it comes to a more enabling environment for civil society, including cooperatives. Cooperatives Europe welcomes that the EU recognises the role of the civil society in reaching the furthest behind.

“Once again the EU recognizes the value of cooperatives as a key economic actor in the achievement of the Sustainable Development Goals (SDGs) and an inclusive covid-19 recovery in EU External Action”, says Agnes Mathis director of Cooperatives Europe. She adds: “Cooperatives Europe will continue to reach out to the EU institutions and advocate to ensure that these important recognitions in the NDICI – Global Europe regulation are also reflected in its implementation.”