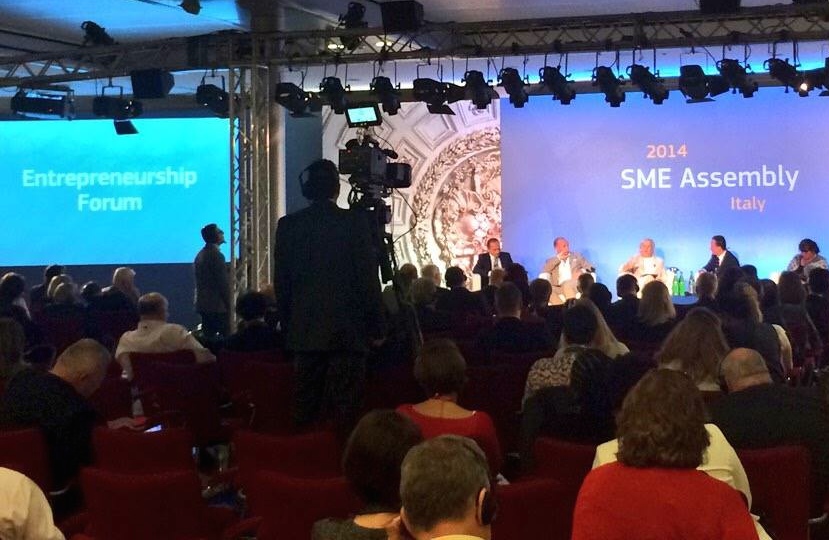 From 1st to 3rd October, Cooperatives Europe participated in the 2014 SME Assembly on ‘Growth Through Enterprise: Exploiting the Opportunities ahead’ and the SME envoy follow-up meeting in Naples. This three-day event is the main focus of the European SME week.

The 2014 SME Assembly counted around 700 participants including policy makers, representatives and experts on SMEs from the EU Commission, EU Member States, and national and European business organisations and entrepreneurs. Digital economy, the next Small Business Act, entrepreneurial skills and the financing of SMEs were some of the topics on the agenda of this year’s assembly.

Agnès Mathis, Deputy Director at Cooperatives Europe, intervened during the assembly’s plenary to highlight the need for the next SBA to fully integrate the principle of the plurality of business forms.

“An increasing interest is being registered in collective participative forms of enterprises, of which cooperatives are the main actor” said Ms Mathis. “The plurality of business forms as a principle has just been discussed at the EU Parliament hearing of Commissioner-designate Elzbieta Bienkowska on 2nd October following a question of MEP Patrizia Toia. Additionally, Vice-President and EU Commissioner Antonio Tajani set up a working group on cooperatives to elaborate a cooperative roadmap. The EU has thus recently recognised the relevance of different ways of doing business twice. European cooperatives are now expecting that the new SBA goes in the same direction”.

Daniel Calleja, Director General at DG Enterprise & Industry, recognised the political support given to cooperatives by the European Parliament and the EU Commission and stressed that the new SBA strategy should include the needs of cooperative and social economy enterprises.

Ms Mathis also participated in the SME envoy follow-up meeting, where Cooperatives Europe is recognised as a stakeholder. In the meeting, the 2014 annual report of the SME envoy network was presented. Commenting on the report, Ms Mathis said: “We welcome this document as proof of the work that the SME envoy has done during the year. However, there are still some points, such as the European Enterprise Network, that currently does not properly address the plurality of doing business specially cooperatives”.