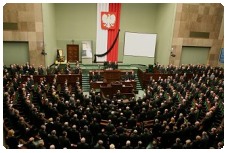 Cooperatives Europe and the ICA have supported their Polish members in the action to defend co-operatives’ existence. Cooperatives Europe alerted its members across the EU of the risk that the Polish and European co-operative movement was running and signaled to the Polish authorities the severe consequences that such a law could have on the economy. Political representatives of the European and global co-operative movements have travelled to Poland in the last months to call upon a level playing field for co-operative enterprises. In June, Felice Scalvini intervened in the National Co-operative Forum in Warsaw to defend the plurality of forms of enterprises, a principle which is recognized in the Lisbon Treaty. On 22nd July Pauline Green, President of the ICA, participated in the EU’s Informal Council of Industrial Ministers in Sopot (PL) where she called upon improved recognition of co-operative enterprises as proven, successful values based businesses that can contribute to a strong competitive European economy

“We are happy with this first success – said Cooperatives Europe Co-president Felice Scalvini – but we keep our eyes open for a political context not recognizing and supporting the development of co-operative businesses”.

“We need to improve communications on co-operatives” said Mr. Alfred Domagalsky, President of the board of the Polish National Co-operative Council and member of the Cooperatives Europe board, “the problems that we are encountering with co-operative legislation in Poland result from the fact that most politicians do not understand what a co-operative is and do not distinguish a co-operative enterprise from a private company”.

The National Co-operative Council is now working to prepare a new draft law which, this time, respects co-operative specificities. To be presented to the Parliament as a “citizens’ initiative”, the draft law will have tu be supported by 100.000 signatures.