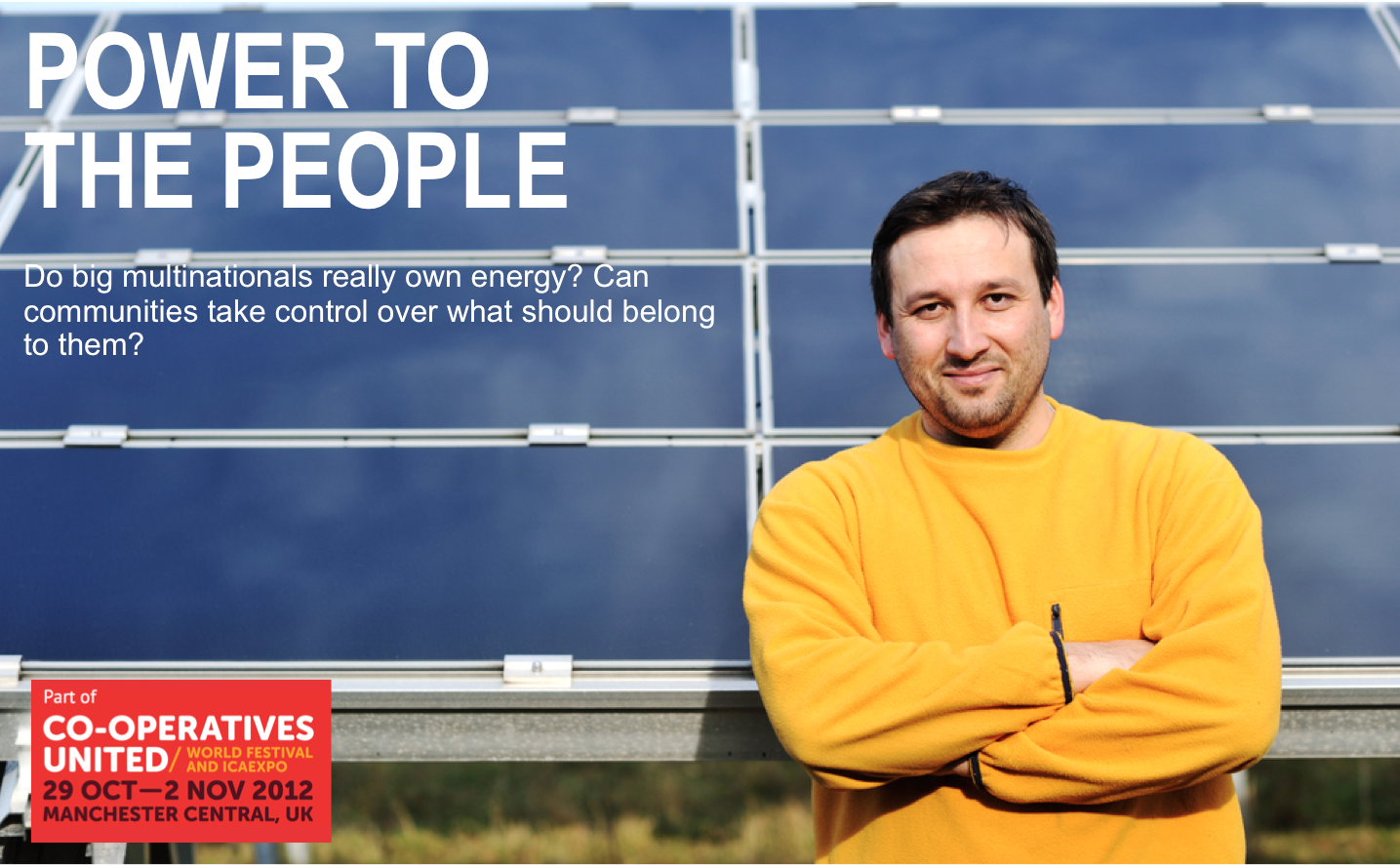 Workshop 1 Power to the people – How cooperatives are shaping a new energy markeThe first workshop focused on how cooperatives have the potential to shape the energy market in three key areas: energy production & distribution and energy efficiency.

Andreas Wieg from DGRV gave an overview of the inspiring examples coming from Germany. In the last 3 years 250 new cooperatives per year were founded and two out of three of these are renewable energy cooperatives.

Dr Wieg said that “key to this has been a guaranteed return for 20 years through an obligation for the grid provider to buy all the renewable energy which is generated via the renewable energy law”. There is a huge amount of creativity in these local cooperatives, for example, a football club who solved the funding gap for a new roof by putting solar panels on it and using this to pay for the roof. Community energy groups also solve a large part of the ‘not in my backyard’ problem, as their cooperatives are community owned and lead solutions.

Nigel Mason of the Energy Co-op spoke about how at national level a cooperative energy distributor can create the demand for these community energy projects. He also spoke of the appeal that in “a consumer owned cooperative, no one but the members and the customers will get the profit”.

Sorcha Edwards of Cecodhas Housing Europe said that “solving unfair energy markets is beyond power switching, we have to make it about people owning their own energy”. She touched on the potential that legislation has to impact change on the ground, for example the growth in community owned energy due to feed-in tariffs.

The discussion looked at the lack of information on setting up energy cooperatives and the best way to promote them. Routes to this included the REScoop.eu project or the Cooperative Enterprise Hub in the UK. Discussions  also focused on the need for both acting in the current energy market whilst also looking for transformational change.

Workshop 2 Power to the people – Start your own renewable energy cooperative (organised in collaboration with Rescoop.EU)

This workshop focused on giving some practical case studies and advice on overcoming the barriers when communities think about setting up their own energy cooperatives.

Dirk Vansintjan shared the background of the REScoop 202020 project and encouraged any existing renewable energy cooperative to sign up on their website www.rescoop.eu

Dirk Knapen of rescoop.be then shared examples of energy cooperatives in Belgium, Denmark and Germany.

This was followed by Annette Heslop of Energy 4 All speaking about their unique funding model for community energy. She also comprehensively presented on the kind of activities which need to be undertaken in order to create a community owned energy cooperative in the UK.

The discussion focused on the importance of not forgetting the values involved in the cooperative movement and understanding that it is more than a model to simply collect money for renewable energy technology.)

Ester Jones spoke about how Torres Hydro renewable energy cooperative had brought together their local community – “even those without shares feel like it is ‘their’ hydro system”.

Bob Burlton of the Energy Saving Cooperative shared how cooperatives have a role to play in the area of energy efficiency by combining “the best of big with the best of local”. He mentioned how this could have a large impact in particular in deprived areas.

Jo Tusseler of the National Trust focused on how working with communities on energy projects can get their buy in and help citizens be a part of the energy transition.

Finally, Colin Baines from the Cooperative Group shared solid statistics on why community owned energy could help speed up the energy transition: “49% of UK public would support a wind turbine within 2 miles of their home, against 22% who would not. When community owned, support increases to 68% and opposition falls to just 7%. 77% believe communities should benefit from local renewable energy schemes.”.